Durham Cathedral Bookshop as pictured on the Cathedral website

On 20th August 2008 we launched an online petition addressed to the Dean and the Chapter at Durham Cathedral expressing concern at the deterioration of the Cathedral Bookshop and the low morale of the staff who serve there since the shop was taken over by the Brewers, and requesting that they take urgent and decisive action to take control of this situation.

The announcement of the petition may be found here:
Rescuing Britain’s Christian Heritage: Durham Cathedral Bookshop

The petition itself may be viewed and signed online here:
http://www.ipetitions.com/petition/durhamcathedralbookshop/

A response from the Dean, received 6th Sept 2008, may be found here:
The Dean of Durham Replies

Within 48 hours of the petition’s launch it had already collected over 100 signatures from members of the clergy, a representative of General Synod, students from Durham University and elsewhere, academic booksellers, at least one concerned author, former SPCK/SSG employees and many others from amongst the shop’s customer base as well as elsewhere. The number of signatories is steadily growing and at each multiple of 50 signatures it will be re-presented to the Dean until the petition closes.

The list of signatories may be viewed here:
http://www.ipetitions.com/petition/durhamcathedralbookshop/signatures-1.html

The petition — which remains open until such time as the Brewers are no longer in control of the Cathedral bookshop — allows space to leave personal comments. Many signatories have chosen to take advantage of this to express outrage at the Brewers’ decimation of the shop and at their mistreatment of their staff, as well as to express their support for the Dean and Chapter, encouraging them to take whatever action may be necessary to save this once great bookshop.

If you share the concerns expressed, please read, sign and leave your comments on the petition today. 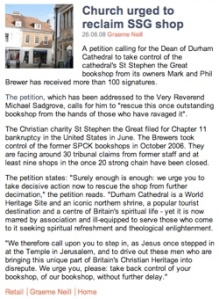 Update, 26/08/2008
Graeme Neill, who has been reporting regularly on the SPCK/SSG affair for The Bookseller, has now posted a report on this petition, screenshot right: Church urged to reclaim SSG shop.

On 12th December 2008 we announced another petition: Rescuing Chichester’s Christian Bookshop. Again, if you share the concerns expressed, please read, sign and leave your comments on that petition as well. Thank you.