We all know about the tooth fairies: you leave your tooth under the pillow, fall asleep, and in the morning your tooth’s gone and there’s sixpence (OK, showing my age…) in its place. In Chester, they have removals fairies, and they’ve paid a visit to the former SPCK bookshop:

We don’t know exactly when the fairies visited, where they’ve taken the stock or who’s got the sixpence: presumably the Interim Manager, and hopefully he’ll be using it to pay off some of the creditors. Never has the phrase “watch this space” felt more poignant…

I also have it on reliable authority that Wesley Owen Chester is scheduled to close its doors for the last time today, leaving Chester without a Christian bookshop. If you’re the praying kind, please remember Ian Vollands and the rest of the staff team in your prayers.

But perhaps the situation is not as bleak as it might seem? Chester is home to eden.co.uk, the UK’s (and probably Europe’s) biggest online Christian retailer, and they’re involved in discussions with friends and church leaders about the future of Christian retail in the city. If you live in the area and would like to take part in those discussions, you can request membership of the Chester Christian Bookshop facebook discussion group.

Responding to concerns that Eden might be branching out into bricks & mortar retailing, Gareth Mulholland, Head Honcho at Eden, said:

There are lots of creative ideas being floated around. They generally involve collaboration, community and shared ownership – none of them involve Eden.co.uk setting up its own bookshop.

Kudos to Gareth and Eden for taking this initiative.

Thanks as always to our intrepid photographer for the pics.

Disclosure notice: the link to eden.co.uk featured in this post is an affiliate link. If you use it and then proceed to make a purchase, eden will pay a small commission to the UK Christian Bookshops Directory. Thank you.

I’ll make this brief, as I expect most of you are up to speed with the Wesley Owen situation. If you aren’t: essentially, the bubble burst on Friday afternoon, 18/12/2009, 5.35pm, when shop staff were notified that their shops were either going into administration (26 branches) or had been sold to CLC (6 branches) / Koorong (8 or 9 branches, plus the website and the brand name).

Please keep all the staff affected in your prayers. If you live in a town with a branch of Wesley Owen, please call in and tell them you love them. Buy them a big box of chocs or a card or something. If you’re an ex-SPCK bookseller, please take this opportunity to give these guys the moral support you wish you’d had when it was your turn.

Sometime today we’re expecting an official press release. Please leave a comment with a link if you see it before I do…

STL UK puts up the ‘For Sale’ sign: who will buy? 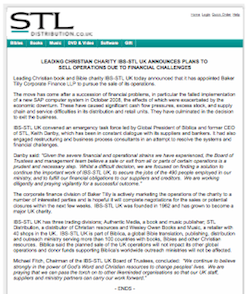 In a press release issued earlier today, STL UK, the UK and Europe’s major distributor of Christian books and related products, have announced that their business is being put up for sale by their USA owners, Biblica. This decision comes in the wake of ongoing cashflow and stock movement difficulties faced by the organisation since an unsuccessful IT systems upgrade in October last year: combined with the current economic climate, the financial stress has become unsustainable.

This represents the biggest shake up in the Christian book trade for well over a decade, the SPCK/SSG debacle not withstanding, and not only puts STL’s 490 employees at risk of losing their jobs but also risks seriously undermining those hundreds of Christian retailers and suppliers who have become dependent upon STL for their supply chain.

I personally believe that this development does not need to be a disaster and at the weekend I put forward what I have called A Modest Proposal to Save STL UK. There are thousands of people whose livelihoods are likely to be disrupted if STL’s future is not secured: all the employees at Authentic Media and Paternoster Publishing; everyone at STL Distribution; all those working for Wesley Owen; and all the retailers and suppliers I’ve already mentioned. But if we stand together, between us I believe that we could stage a trade buy-out and take over the business as a shared ownership company.

But there is no reason why others — churches and other Christian organisations — couldn’t get involved. We have the means, if we have the will.

If you believe the idea of such a buy-out has merit, please spread the word amongst your friends and churches; if you have any other suggestions for a way forward, please speak out; and please pray for all those whose livelihoods are now under threat.

The UK Christian book trade and the church itself failed when SPCK hit hard times back in 2006. Many people’s lives were ruined and many are still picking up the pieces. It would be a tragedy beyond belief to see that failure repeated with Wesley Owen and its associated companies.