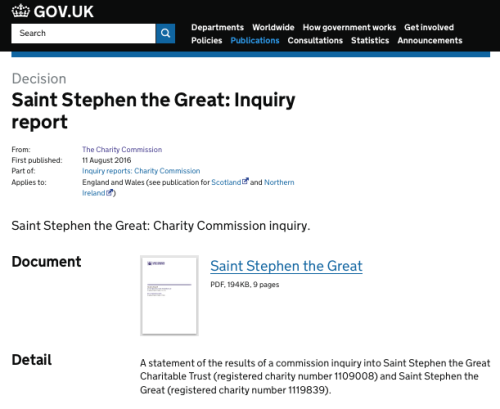 IT’S TAKEN A LONG, LONG TIME but today the Charity Commission has at last issued its assessment of the Brewer brothers’ gross mishandling of the former SPCK Bookshops.

The nine page report (available here) fails to identify the Brewers by name but nonetheless makes damning reading as it brings to light huge irregularities in a wide-ranging and complex inquiry that examined four specific areas:

After a brief introduction to the Saint Stephen the Great Trust and Company, the report  identifies the issues under investigation, summarises the Commission’s findings, reviews the interim manager’s activities and findings, and draws the following conclusions:

The interim manager concluded that the trustees had mismanaged the trust. There were unmanaged conflicts of interest and loyalty related to directorships of associated companies and contracts entered into by some of the trustees.

The inquiry considered that some conflicts were so intrinsically linked to the trust’s administration that they could not be managed. The inquiry was concerned that the trustees’ lack of ability to manage conflicts of interest and loyalty arising from their involvement in connected organisations could lead them to consider it appropriate to use the trust’s funds to satisfy the liabilities of the other entities.

The inquiry highlighted poor governance, lack of due diligence and inadequate record keeping on the part of the trust trustees and the company directors. Trustees are under a duty to be prudent with the charity’s assets, the lack of prudence in this case and the lack of trustee awareness of their responsibilities has led to the demise of the trust and the company.

The interim manager concluded that it would be expensive and risky for the trust to restart managing the shops. There was no prospect of new trustees wishing to manage the trust and no evidence that beneficiaries or interested parties wished the trust to continue. It was in the trust’s best interest for it to be wound up with surplus assets transferred to charities with similar objectives.

The inquiry concluded that there had been serious mismanagement and misconduct of the trust and company by the trustees.

It then goes on to outline the extent, cost and impact of the Commission’s regulatory action, briefly noting the vast sums involved:

Finally, the report considers issues for the wider sector, highlighting lessons to be learned from the failings noted and highlighting the duties and responsibilities of charity trustees, who must always:

Sadly, as well as failing to name those responsible for this Christian book trade disaster, the report also fails to consider the human cost for those caught up in it — the distress, hardship and misery caused to so many — noting only that “Thirty four of the shops’ ex-employees submitted redundancy claims” and that “Settlement of the redundancy claims from ex-shop employees was made and claims were paid in 2009 and 2010.”