A crowd of 60-70 people squeezed into St Olav Christian bookstore at 10:00 am on Saturday 12 December for the opening service led by the Rural Dean for Chichester, Richard Hunt.  The picture shows the crowd beginning to gather, at about 9:55.

Chichester: The Door is Shut. Only Durham remains.

These are two photos cross-posted from the ASingleBlog site. The former-SPCK Bookshop in Chichester has been closed on the instructions of the Charity Commission.

This is sad, and yet it means that – exactly as per the takeover of the SPCK-SSG charity by the Charity Commission Interim Manager – those trying to resolve this are now dealing with people of integrity, so we can at least say that Chichester is now on the way out of the swamp.

So the Brewer cash-generating, personal-expenditure subsidising, money-grubbing, supplier-swindling, staff-bullying, legality-avoiding (e.g., lack of required liability insurance), asset-stripping, and Durham Cathedral brand-poisoning, activities can now only be carried on in the Durham Cathedral Bookshop.

Every day that the Brewer-boys retain control of that shop provides a further opportunity for abuse.

Will someone in authority please finish the job?

Here are the Chichester Photos: 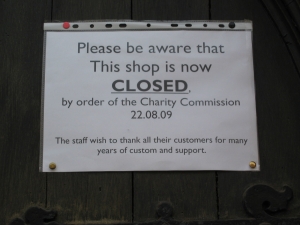 What is happening with the shops?

OK – we have had movement with the SSG saga but I was asked a question by Clem Jackson of Christian Marketplace as to the number of shops still operating. The list on the Thirdspace website is as follows: Bradford, Canterbury, Chester, Chichester, Durham, Hereford, Manningham, Newcastle Upon Tyne, Poole, Salisbury, Truro, Winchester, Worcester, York. This list (though updated in January according to the website) is really inaccurate. So over to you – what is the latest at each shop if anything? Durham, Chichester, Chester are still open. Is the shop in the Bradford area actually the Bradford shop or the one in the church in Manningham?

On Thursday 29th January 2009, one of you splendid people out there had the awesome privilege of experiencing our 100,000th pageview. Was it you? Did you capture that magic moment? I captured our 100,022nd as per the screenshot, right (though I was not actually the 100,022nd pageviewer: WordPress doesn’t count my visits).

So, for the statisticians and the incurably  curious, I take this opportunity to present some more facts and figures:

The Upsy-Downsy Chart for the last few days 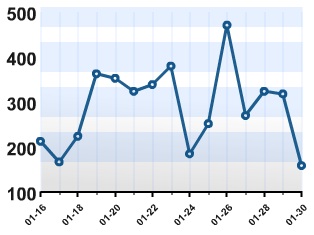 There are lots more stats available, of course: feel free to ask if you’d like more details on any particular page or post. Scroll down the sidebar for live updated lists of the current top posts and pages, pageviews and departure destinations.

Now, changing the subject entirely: let’s plan ahead for February. Who’d like to design a couple of Valentine’s Day Cards for J Mark and Philip ‘Dubya’ Brewer? Let’s show them some true blogger love and appreciation.

Recently I posted a detailed article about questionable financial transactions in the operation of the former SPCK bookshop chain by its new owners, with a particular focus on the bookshop at Durham Cathedral – now run by a newly created (11/3/2008) company called “Durham Cathedral Shop Management Limited” (DCSML).

In the Durham case, a debt of £80,000-£110,000 (depending on the exchange rate – it is $165,000+) to the new company was built up over a mere three month by the previous organisation – Society of Saint Stephen the Great Charitable Trust. J Mark Brewer attempted to put SSGCT into Bankruptcy in Texas on 19 June 2008 (that is the date when the “Statement of Financial Affairs” was filed) with this debt to his new company unpaid.

In addition to the new company at Durham, another company was created on the same day to run the former SPCK Bookshop in Chichester, which is on a zero-rent 50 year lease from the Diocese of Chichester.

And also in Chichester

The Brothers Grim appear to have pulled exactly the same stunt in Chichester, for a smaller sum. Here is the snippet from the SSG Bankruptcy Schedule of Debtors Continuation 2 (page 61):

The principle is exactly the same as at Durham, this document shows an outstanding debt of $35844.10 (18,000 ukp at 1:2 exchange rate) owed to the Chichester Shop Management Co. Here are the company details:

Remember, the company to which this debt was owed only came into existence 11 weeks before the debtor filed for Bankruptcy.

So, repeating my previous incredulity:

how did the Saint Stephen the Great Charitable Trust (SSGCT) manage to build up a debt to the new company running the Chichester Shop on this scale between 11 March 2008 when that company was created, and June 4th 2008 or thereabouts when J Mark Brewer attempted to put the Charitable Trust itself into Bankruptcy in Texas?

Or, to take a view from the other side, resources or assets equivalent to $35,844.10 were transferred out to SSGCT at a time when past suppliers were simply . not . being . paid.

And what were the ethics and business practices involved?

And why did this transfer – like the Durham one – involve the soon to be bankrupt SSGCT (and anyone who has read the Bankruptcy Documents will know that they would take weeks to prepare)?

And that is all without even thinking about asking why another $75,000 (documented in the article linked above) was transferred out of SSGCT 48 hours before it was made Bankrupt into another Brewer directed organisation, when preparation for the impending bankruptcy would be well under way?

The SPCK mission society who used to be associated with the bookshop chain which includes the Chichester Bookshop is no longer involved in any way, apart from in the Legal Action sense. Nothing in this article reflects on SPCK.

Not an Article about the Chichester Bookshop

Stand Up SPCK Up

I was planning to do a piece about the Chichester Bookshop, but I couldn’t get to my files because of Hurricane Conditions prevailing in Texas.

Come back tomorrow for some new developments.

posted by Matt Wardman, “purporting” to be an author of this blog.