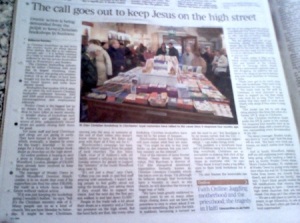 The call goes out to keep Jesus on the High Street

Thank you to Rebecca Paveley for a superb write-up in Saturday’s Times, p.100, outlining both the crisis facing and the future hope for the UK’s Christian bookshops: The call goes out to keep Jesus on the High Street.

And congratulations to St Olav Christian Bookshop, with their photo of opening day occupying centre spread in the article and featured as an example of the future shape of Christian bookselling:

Phil Groom writes a blog on the future of the Christian bookshop. He runs one himself at the London School of Theology which, despite having a guaranteed customer base, is still struggling. He believes the only future is for shops to be run in partnership with local churches as community hubs.

“Shops have got to be much more than just bookshops. They have to be destinations for community,” he says.

“We could ham up the guilt for Christians or local churches to get them to support us, but that would only work for so long. They have to realise that they need to work more closely with shops if they want to keep them.”

This model has led to one shop rising phoenix-like from the ashes of a former SPCK shop in Chichester.

St Olav Christian bookshop closed under the SPCK name in the summer but reopened four months later as an independent shop, with a board of trustees representing every denomination in the city.

The shop’s manager, Bradley Smith, says there is “every sign” that the shop will do well: “We have very loyal customers, we didn’t realise how loyal at first.”

More discussions about the future of Christian bookshops emerging shortly, hopefully, on that other blog Rebecca mentions: A Future and a Hope for the UK’s Christian Bookshops