Brewers Still Faking It In Salisbury

Posted on January 4, 2009 by Phil Groom | 28 Comments
Congratulations to J Mark Brewer on winning the much coveted Mr GAFCON 2008 award. Mark, you are truly a hero and I can think of no one else so deserving of this trophy: well done, sir, well done!

Thanks to one intrepid photographer (you know who you are: thank you) we can reveal that despite a Trading Standards investigation requiring the removal of their illegal SPCK signage, as of 18th December 2008 the former SPCK Bookshop in Salisbury was still using an SPCK Sale notice in its window: 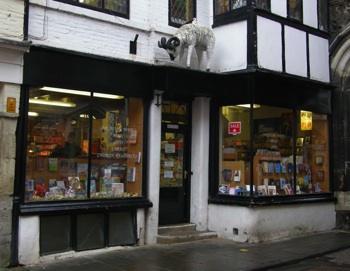 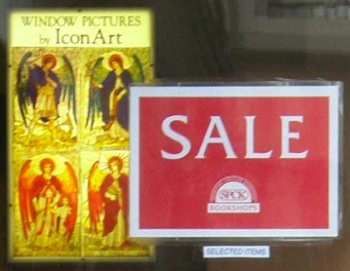 Have to say, I was rather taken by the ‘Window Pictures by Icon Art’ backdrop to the sale notice. Very fetching; and I do hope someone closer to hand will check — and if they’re still displaying this notice, that someone will fetch Wiltshire’s Trading Standards back again…

Somebody remind me, please: how long ago was it that the licence to use the SPCK name in connection with the bookshops was withdrawn? And what did Mark Brewer himself say about wanting to dissociate SSG from that name? Something about “traditional Christian values”? One wonders which tradition he had in mind…

“It is important that the people who work for this charity want to work for it and are devoted to supporting its work because it is not ‘just a job’; it is a mission,” he said. Brewer added that he has no intention to sell off stores. “I did not agree on behalf of Saint Stephen the Great to acquire 23 brilliant locations in great cathedral cities throughout the country, only to sell them a year later,” he said.

“These shops are like the talents the Lord spoke of in the parable, and to earn His favour as ‘good and faithful servants’ we must invest these talents for His glory. That is why I have taken a bold e-commerce initiative to become the dominant online Christian bookseller. I have also opened two new shops since the acquisition.”

28 responses to “Brewers Still Faking It In Salisbury”