Firstly, the shop in Durham Cathedral is operated on a Leasehold basis and is not directly managed by Durham Cathedral Dean and Chapter. The business malpractices documented in this article concern Mark and Philip Brewers’ running of the former SPCK chain of bookshops. These are not legally the responsibility of Durham Cathedral.

I hope that that disclaimer is clear in its meaning. So – to business.

This is an advert for Third Space Books scanned in from the Middlesborough Diocesan Year Book 2009 of the Roman Catholic Diocese of Middlesborough:

Call me St Cuthbert and set me spinning in my grave, but I’d have thought that any adverts bigging up Durham Cathedral Great Kitchen as the base for the Brewer run bookshop should actually use the website and name of Durham Cathedral Shop. Certainly when I phoned up 0191 386 2972 this morning, that is how the phone was answered by a very friendly-sounding shop assistant.

Further, the terms of the Lease on the shop commit the lessee to “diligently publicise” the shop. Using a different name in adverts to that used to answer the phone does not seem to me to fit that bill.

And surely the real advantage of the name “Durham Cathedral Shop” is that it stays the same for a reasonable length of time. You almost have to put a display screen in where the lease used to say “SPCK” these days, because responsibility for the lease has gone through a series of business entities like a game of pinball as the Brewers try to dodge paying for the at least $1.5m worth of goods, services and employees’ money they have obtained or retained in violation of all their legal responsibilities.

This is what the Lease (I have a copy of the lease under which SPCK operated Durham Cathedral Bookshop) says (my italics):

The Dean and Chapter of Durham Cathedral

As explained above, “SPCK” should be replaced by whatever the name of the business entity operating the shop happens to be this month. So far, it has been (I think, but it’s tough keeping track from outside):

Next month it will presumably be renamed to something like Shysters ‘R’ Us.

Does anyone know if you you can get leases with the name of the lessee written in erasable ink?

Transferrable Assets (or not)

This post assumes that the Brewers have managed to transfer the lease successfully among their various business organisations. If that is so, I cannot understand their problems in transferring any of the following (to pick a few examples out of the air):

Strangely, J Mark and Philip Brewer seem to be incredibly efficient (PhD Level at least) at transferring payments of hundreds of thousands from the former-SPCK chain of bookshops to other organisations they control.

END_OF_DOCUMENT_TOKEN_TO_BE_REPLACED

It is 8 months since Phil Groom started the SPCK/SSG News Blog to help scrutinise the rundown of the former-SPCK chain of Bookshops.

Our cartoonists have kindly contributed a cartoon or two to remind everyone that it is the end of the year, and we’re still here. Here’s Gerald the Sheep back in town: 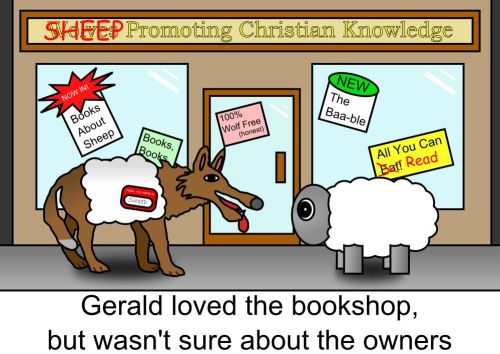 (By the way, there is a big “printable” version of the cartoon here).

This is how Phil stated the problem back in April:

What, exactly, do we mean by the designation ‘Christian’ when we refer to bookshops or publishers? Is it simply that we trade in products that relate to the Christian faith — are we simply a subset of other businesses and commercial enterprises? Or is there — should there be — something more distinctive than that? A sense of mission, perhaps? A sense of mission that goes beyond questions of finance, profit and loss, that makes us determined — somehow — to continue trading no matter what the odds stacked against us?

Or is it something about our business practices? Honesty and integrity, compassion and humility — a willingness to put others first: an emphasis on service, on service that goes beyond the call of duty to offer our customers, our co-workers — whether employees or employers — the best that we possibly can? Treating others with respect, as better than ourselves…

I ask these questions not out of idle curiosity but out of deep concern as I watch the debacle of the SPCK/SSG bookshops deepen, a once excellent chain brought to ruin (latest reports listed below)… and as I see Christian divisions of secular publishing houses increasingly dominating our marketplace. Lorna Roe, responding to my ‘Bibles and Bookmarks‘ post, puts the question about publishers bluntly:

There are a lot of ‘Christian’ publishers out there who try and cash in on the huge popularity of that one most important book, the Bible. Blatant materialism.

So, to get to the crux of the issue: is being Christian about what we (say we) believe or about how we behave? I put it to you that what we believe only matters insofar as it affects the way we behave. Jesus himself warned us about wolves in sheep’s clothing: “By their fruit you will recognize them.” (Matthew 7:15-20).

In that light, what does what we’ve seen to date of the behaviour of the Brewer brothers tell us? What we’ve seen of the their attitude towards their staff; towards their suppliers; towards SPCK… of their disingenuity in their correspondence here, denying the reality of shop closures? Can we, with any sense of integrity, continue to refer to their shops as ‘Christian’?

I am in a quandary: on the one hand I want to support those SPCK booksellers who have somehow survived the storms thus far and are still working in their shops; on the other, I find myself wanting to expunge every record of the SPCK/SSG Bookshops from the UK Christian Bookshops Directory. The designation ‘Christian’ is sullied and brought into disrepute by the Brewers’ behaviour.

Would Jesus recognise them as having anything to do with him?

What would you do?