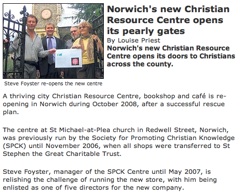 The article announces that the St Michael-at-Plea church in the city centre which was once home to SPCK before the demise of the bookshops through the management of SSG is to re-open during October as a new Christian resource centre.

On board the project are many of the original SPCK staff who have been re-appointed for the new project. The article on the BBC website says

‘Steve began negotiating a possible takeover of the former SPCK bookshop in 2006, to try and return it to its original form. However, those early discussions never came to fruition.

Nevertheless, Steve is very excited that not only is the centre re-opening, but with it, the café and its original chef.

“We are all coming back together again like a family. St Michael is such a lovely building and it’s so light, providing a very special atmosphere,” said Steve.

It hasn’t been an easy transition though.

“It has been like swimming through treacle without an aqualung. It nearly drove me and the family insane!” admitted Steve.’

You can read the article in full here