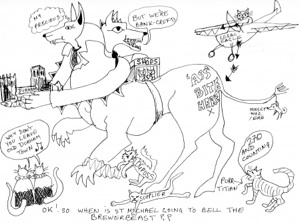 Top marks to mousey over at asingleblog for this superb sketch of the situation in Durham: a picture really does paint a thousand words.

Sadly, the more that emerges of the Brewers’ misdemeanours and mistreatment of their staff, the more monstrous they appear, to the point where it’s not only the UK’s Orthodox community disowning them but also their fellow Americans, and in no uncertain terms. Just a few days ago Anne from Atelier Beads commented:

… the Brewers meet the most classic, textbook standards for the “Ugly American” that I have seen in a long, long time. And I refer to the book by that name published a generation ago. I am absolutely mortified by their tactics and their methods… They’re an embarrassment to their country…

Anne has expanded on this in her own blog, Injustice for All: More on the Brewer SSG Saga:

Apparently it’s OK for the Brewers to go to a far country and completely forget about—totally ignore—precepts we live by (and that many have died for) in our own country. When you look at these blog comments and combine them with the proliferation of Brewer-originated “Cease-and-Desist” notices, it looks as though three of our bedrock principles of liberty—freedom of speech, freedom of religion, and freedom of the press—are simply being ignored. Or worse, trampled underfoot.  Apparently, in their zeal, they haven’t just flown in the face of U.S. bankruptcy laws. They also don’t have much regard for the Constitution or for the civil rights of the individual. If they did, they’d observe those laws as a matter of principle with every human being in every part of the world—not just here where the consequences of being caught can be unpleasant.

What you whisper in secret will be shouted from the rooftops. Not because of malice, but because what has been done to Dave, and to SPCK staff, is a grave injustice, and until it is righted we will continue to shout.

If you, like me, would like to see these American werewolves driven out of Durham Cathedral, please — if you haven’t already done so — send them a silver bullet by adding your name to this petition — and ask your friends to do the same. Even better, once you’ve signed it, please print out the page with your name on and send it with a personal letter of support to either the Dean or the Chapter Clerk: contact details on the Cathedral website.