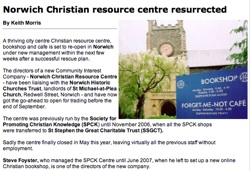 A new Community Interest Company is on course to resurrect a shop and café within St Michael-at-Plea, Redwell Street, Norwich, the church previously occupied by SSG and SPCK, from July 2004 to May 2008.

The Norwich Christian Resource Centre will be managed by Steve Foyster who will be returning to this venue, having left in June last year to set up a new online shop. His four fellow directors come from Anglican and free church backgrounds.

Since the centre finally closed in May the directors have been in direct liaison with the landlords, Norwich Historic Churches Trust, who are delighted that once again the redundant church will be used for the communities of Norwich, Norfolk and beyond.

Virtually all the ex-shop and café staff, most of whom were unable to find other employment, will return, along with the twenty or so volunteers who make the running of the well frequented café possible.

Regrettably nearly all the shop fitments and café equipment have been removed, though thankfully the bookshelving remains as an integral part of the listed building. Very generous donations are helping to buy new or secondhand replacements and several enthusiastic stakeholders are putting up no-interest three year loans to enable the purchase of new stock. Once the centre is open there will be an appeal for donations of second hand books. The new company has already received over £750 in donations following a recent appeal on the Network Norwich site, as well as a fax machine, PC and inkjet cartridges.

I remember all the blood, sweat and tears that went into the planning of this wonderful centre, when I was involved in 2004. It was always very well stocked with the widest breadth of titles, including a wealth of second hand titles, sought after as far afield as Canada and Finland.

It pleased me most that customers couldn’t pin down any particularly dominant theological strand – Karl Barth rubbed shoulders with Rick Joyner and hoodies hung alongside cassocks!

We were able to hold dozens of after hours events ranging from debates between humanists, bishops, MPs and professors, to an evening with Julie Reinger, the ‘Look East’ weather presenter. The team even re-enacted the famous Communication Problem episode within a Fawlty Towers evening. We knew of many people who came through the doors that would not normally set foot in a Christian shop let alone a church.

Although customers can easily move on to other providers, given the wealth of prayer and enthusiasm for the new venture from hundreds and hundreds of supporters, the new team are confident that NCRC will be more than viable.

Steve and the team hope to start trading on Wednesday 1st October.

Events are already being scheduled:

Many sincere and heartfelt thanks to all those who have prayed about this new venture for so long.

Index of Reports from Network Norwich (most recent first)